“Vow To Never Be Hard On Myself Again” 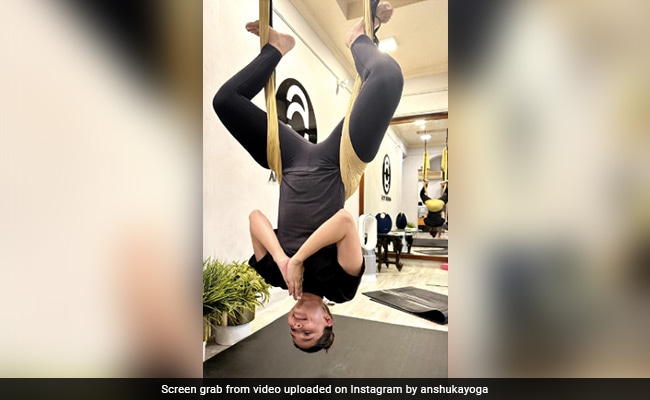 Alia Bhatt in a still from the video. (courtesy: aliabhatt)

Alia Bhatt, who welcomed daughter Raha last month, shared an extensive post on body positivity and her postpartum journey. Sharing a picture of herself doing aerial yoga, the actress wrote: “One and a half months post-partum, after gradually re-building my connection with my core, and with full guidance from my teacher Anshuka, I was able to attempt this inversion today. To my fellow mamas, listening to your body post delivery is key. Do not do anything your gut tells you not to.” The actress added, “For the first week or two during my workouts, all I did was breathe… walk… find my stability and balance again (and I still have a long way to go).” The actress wrote about embracing body positivity and wrote: “Take your time – appreciate what your body has done. After what my body did this year I have taken a vow to never be hard on myself again. Childbirth is a miracle in every way, and giving your body that love and support that it gave you is the least we can do.” She signed off the post with these words: “PS – every body is different – pls speak to your doctor before doing anything that involves exercise.”

This is what Alia Bhatt posted:

The video of Alia Bhatt practicing yoga was shared on the official Instagram page of celebrity fitness trainer Anshuka. In the video, Alia Bhatt can be seen doing aerial yoga with utmost ease. The caption on the post shared by Anshuka Yoga’s Instagram page read: “Alia Bhatt floating in her first hammock inversion postpartum. Only Shaheen Bhatt (Alia’s sister) knows how much glee this brought me.”

Alia Bhatt announced the name of her and Ranbir Kapoor’s daughter in an Instagram post last month. She revealed that their daughter’s name Raha has been chosen by Ranbir’s mom Neetu Kapoor.

Alia Bhatt and Ranbir Kapoor welcomed their first child, a baby daughter on November 6. The actress announced the news of her daughter’s arrival with this post and she wrote: “And in the best news of our lives:- Our baby is here…and what a magical girl she is. We are officially bursting with love – blessed and obsessed Parents! Love, love, love Alia and Ranbir.”

Alia Bhatt announced her pregnancy in an Instagram post in June this year. She married Brahmastra co-star Ranbir Kapoor in April this year at their house Vastu, in front of a few family members and close friends. The star couple had been dating for over 5 years before getting married. Their story began on the sets of Ayan Mukerji’s Brahmastra, their first film together.

The actress will soon make her Hollywood debut with Heart Of Stone, co-starring Gal Gadot. She also has Rocky Aur Rani Ki Prem Kahani and Jee Le Zaraa, with Priyanka Chopra and Katrina Kaif lined up.

Complimentary yoga classes to be held at Square One in Mississauga

Preferred Region How does this work? By Lucy Mazzucco Published February 1, 2023 at 11:15 am Those who enjoy...

The 7 Best Health Resolutions for 2023 That You Can Actually Keep, According to Experts — Best Life