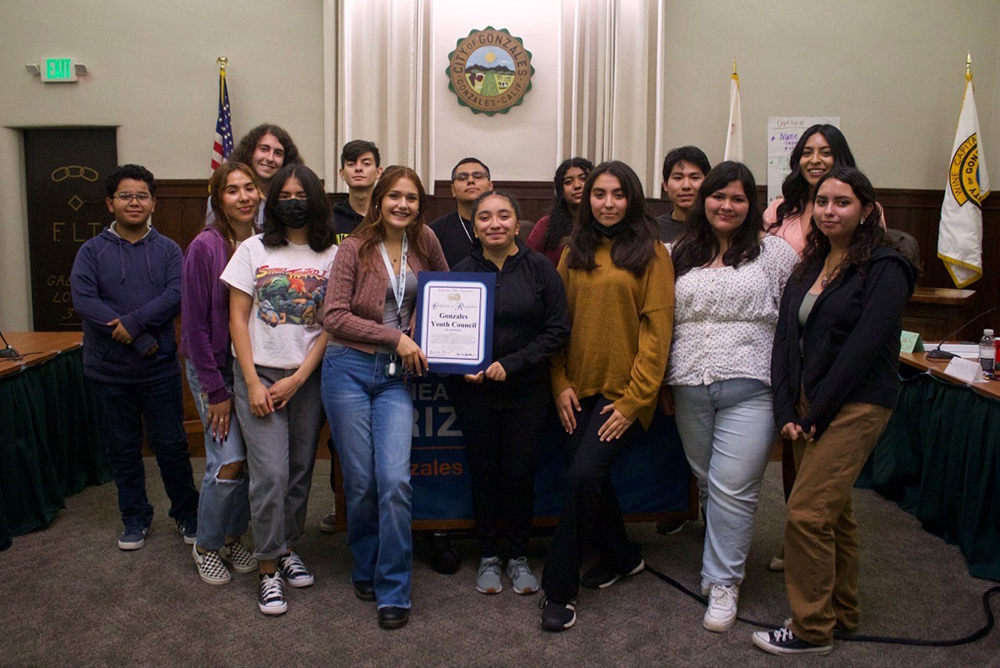 Columnist Joe Mathews writes about the Gonzales Youth Council, and how its members are tackling the mental health crisis facing their peers. Photo by Michelle Slade. Courtesy of Gonzales Youth Commissioners & Council.

How will California ever solve the mental health crisis among its young people?

Perhaps by empowering young people to do the job themselves.

That, at least, is what happening in the state’s most innovative small town, Gonzales (pop. 8600), in the Salinas Valley.

Starting in early 2020, middle school and high school students—members of the Gonzales Youth Council, a parallel city council for the young—have taken the lead in documenting the damage the pandemic was doing to their peers. But they didn’t stop there. Using their data, they created a new mental health strategy for the city and its schools, and secured resources to enact it.

In the process, Gonzales teens offered a model of do-it-yourself pandemic response with such potential that a report describing it was recently published in a peer-reviewed academic journal for school psychologists.

It’s no surprise that this work was done in Gonzales, a working-class marvel of self-governance in California’s lettuce lands. It’s a center of agriculture, food processing, and manufacturing, with a population that is 90 percent Latino and quite young for today’s Golden State (with one third of residents under age 18).

Over the past generation, the town has prioritized public participation and empowerment of its young people in community problem-solving—a strategy dubbed “The Gonzales Way”. In the process, Gonzales has produced eye-popping solutions to challenges from economic development to energy independence. Gonzales has been especially strong on health issues—winning national awards as it found ingenious ways to get clinics and medical professionals to serve its people, and vaccinating more than 99 percent of its eligible population for COVID. 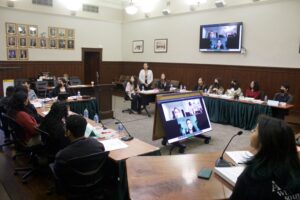 Gonzales’ Youth Council—a student-selected body of ninth to 12th graders first established in 2015—has been a big player in this work because it has real power. The body has written local laws on underage drinking, and led a police-community relations effort. Its members sit in on job interviews at the local schools.

Back in fall 2019, youth council commissioners began talking about focusing next on mental health. When the pandemic hit, they accelerated their plans.

The council wanted to start with an extensive survey of Gonzales youth. Unable to work in person, they needed to do the survey online—and to make that happen, they secured funding (from the Trinidad & Lupe Gomez Family Fund, a homegrown philanthropy), and sought advice from Gonzales’ own CoLab, a collaboration between the city and area colleges to develop solutions to community problems.  At a CoLab networking event, the young commissioners met Cal State Monterey Bay child psychology professor Jennifer Lovell.

“They were on the path to creating their own survey already,” says Lovell, whose research team then joined forces with the council. Under the partnership, university researchers helped the youth leaders to design the survey, gather anonymous responses, and analyze the quantitative and qualitative data. The youth council had final say on the survey’s contents and owned all the data.

Over the past generation, the town has prioritized public participation and empowerment of its young people in community problem-solving—a strategy dubbed ‘The Gonzales Way.’

The council conducted its first mental health survey in late spring 2020, focused on the question, “How well are youth doing during the COVID-19 crisis?” The survey included 52 questions (multiple choice, rating based, and open answer) on subjects from loneliness and screen time to academic coping.

The results revealed considerable mental stress among Gonzales kids. It wasn’t just that two-thirds said they were falling behind academically as they struggled with school closings and unreliable online lessons. Some 60 percent of the middle and high school students with younger siblings surveyed reported that they were having to help brothers and sisters complete their schoolwork online. And more than half of high school-age respondents gave answers that indicated they were suffering from anxiety, depression, or both. Gonzales’ young people also reported that they needed more information about how to handle these and other mental health problems.

The Youth Council swiftly developed plans to provide that information and assistance. The council circulated its own mental health check-ins via Instagram. The council also shared hotline numbers, inspirational messages, coping tips, and self-care reminders with students, and sought training for young people in how to respond when peers are having mental health issues.

In fall 2020, the youth council met with school, city, and county officials to advocate for more resources to assist Gonzales youth with their mental health burdens. As a result, these local governments resolved to reduce the stigma around mental illness and to make it easier for students to report mental health challenges.

The meetings also produced a new financial commitment. In January 2021, the city and school district agreed to share the cost of hiring an additional licensed clinical social worker to support student mental health.

But the youth council isn’t finished with this work, or satisfied the mental health of Gonzales. Earlier this year, the young people conducted a follow-up survey to test the impact of the new mental health resources, and asked students what else they need.

The good news: The 2022 survey revealed decreases in the high rates of mental stress, anxiety, and depression reported in 2020. But students reported continuing struggles balancing the burdens of homework, family, and managing their own health, and said they wanted better access to mental health services.

“We’ve had a bit of progress, mental health is being talked about more at school, but we need to keep talking about reducing the stigmas of mental health,” youth council commissioner Sherlyn Flores-Magadan, a Gonzales High School senior, told me. “And we have to provide more information to parents—that’s one of the keys for helping our teens.”

In Gonzales, there is also talk of new peer-to-peer projects—especially around tutoring, pedestrian safety, and community gardens. The logic is straightforward: Who better to help kids than kids themselves?