Build Strength and Power With These Exercises


Have you ever practiced a medicine ball workout and lost control of the ball? It might not happen often, but if it does, it can totally mess up your momentum.

That’s why you might want to turn to a slam ball instead, particularly a weighted one that sticks to the ground when you throw it. A slam ball workout will then challenge your strength and stability, and seriously enhance your power—without sending you running to chase the ball. That means you can focus on the actual exercises, creating as much force as you can with each move.

The slam ball workout below is a coordination and stamina challenge designed by Noam Tamir, C.S.C.S., CEO and owner of TS Fitness in New York City, to help you build total-body strength during the off-season.

The Benefits of a Slam Ball Workout for Runners 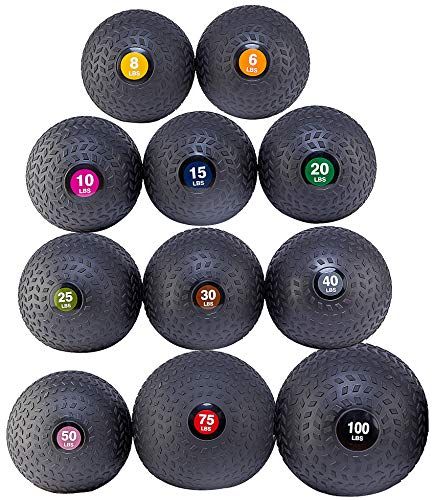 “Slam ball movements are great for building strength, power, and endurance,” Tamir tells Runner’s World. “They also require a good amount of coordination. These are all elements that help runners.”

While you don’t have to worry about absorbing the bounce back of the ball with these exercises, that doesn’t mean you’re off the hook when it comes to getting your upper and lower body to work together to execute the moves—a skill that’s also crucial for efficient performance in running, Tamir says.

The great part about this routine is it will force you out of your comfort zone while strengthening the muscles in your legs, glutes, shoulders, core, and more. Plus, you can even get a little stress relief each time you toss the ball to the ground. The question is: Are you up for the challenge?

How to use this list: Do each exercise listed below, in order, for the number of reps described. Complete 2 to 3 total rounds. Take 60 to 90 seconds rests after completing the overhead slam, rainbow slam, and single-leg balancing slam, and 30 to 45 seconds of rest after the split squat with lateral slam, pop squat slam, and lateral lunge with slam.

You will need a slam ball for this workout. Tamir demonstrates each exercise in the video above so you can learn proper form.

Why it works: Tamir says runners should practice this move because it helps strengthen your hip and glute muscles—the most important muscles involved in running.

How to do it: Start standing with feet a bit wider than shoulder-width apart, holding the ball with both hands. Reach the ball straight up over head, coming onto the balls of feet. Then, while sending hips down and back into a squat, slam the ball to the ground. Pick the ball up off the ground, drive through feet to stand up, and repeat. Do 6 to 8 reps.

Why it works: The side-to-side movement of the torso means your obliques put in serious work to aid in core strength and stability on your runs, Tamir says.

How to do it: Start standing, holding the ball with both hands at chest. Step right foot back and lower into a lunge, both knees bending about 90 degrees. Hold the lunge. Reach the ball straight up overhead. Then, turn torso to the left, keeping hips square to the front, as you slam the ball to left side of body. Pick it up, staying low in lunge, then reach it overhead and turn torso to the right, keeping hips square to front, as you slam the ball to right side of body. Continue alternating. Do 8 to 10 reps on each side. Then switch lunge stance and repeat.

Why it works: This exercise requires you to pivot your hips in different directions, while recruiting your obliques. It reinforces the stability of the spine during running, says Tamir.

How to do it: Start standing with feet shoulder-width a part while holding the ball with both hands. Reach the ball straight up overhead, coming onto the balls of feet. Turn torso to the left and pivot on both feet, bending both knees to create power as you slam the ball down to the left side of body. Pick the ball up with both hands, return through center, reaching the ball overhead. Repeat, this time turning and throwing the ball to the right side of body. Continue alternating. Do 6 to 8 reps on each side.

Why it works: This exercise will put your upper body strength and overall endurance to the test. More specifically, it will target your shoulders, chest, and triceps which will help with your arm drive, Tamir says.

How to do it: Start standing with feet together while holding the ball with both hands at chest. Jump both feet out wide, sending hips down and back for a squat, as you slam the ball to the ground. Pick up the ball and jump up, exploding off the floor to bring feet together. Repeat. Do 15 to 20 reps.

Why it works: This is probably the most beneficial exercise for runners to practice in this entire workout, according to Tamir. It forces you to maintain stability on one leg and through your core, while generating a lot of force—this is what happens as you run, he explains.

How to do it: Start standing with feet together while holding a ball with both hands at chest. Shift weight to right foot and bend left knee at a 90-degree angle, foot behind you. Reach the ball straight up over head. Then, slam it to the ground. Stay balancing on right leg as you reach down to pick up the ball. Repeat. Do 6 to 8 reps on each leg.

Why it works: Practicing this exercise will prepare runners to handle changing terrains as they run. “We need to be equipped to have strength in muscles that help us in different planes of movement. This optimizes our performance and helps us minimize the chance for injury,” says Tamir.

How to do it: Start standing with feet together while holding the ball with both hands at chest. Step left foot out about three to four feet, bending left knee and sending hips back, as you slam the ball to the ground. Keep right leg straight. Then, pick up the slam ball and push through left foot to stand back up, feet coming together. Repeat. Do 8 to 10 reps. Then repeat with right side stepping out for 8 to 10 reps.

Monique LeBrun joined the editorial staff in October 2021 as the associate health and fitness editor. She has a master’s degree in journalism and has previously worked for ABC news and Scholastic. She is an avid runner who loves spending time outside.